Renee: My name is Renee Chavez, I’m majoring in Studio Arts with focus on painting and jewelry.  I’m an enrolled tribal member of Isleta Pueblo. I was born in Albuquerque and raised on the Isleta reservation.

Desta: My name is Desta Shaw, I am majoring in Creative Writing. I am a tutor. I’m actually working about three jobs right now and going to school full time.

Desta: I noticed with your pieces that all of them are untitled. I was wondering why that is?

Renee: There are no titles right now, 3 of the paintings we have looked at are studies done on paper that I have not fully worked out. So, that’s the reason for no titles at the moment.

Desta: In your pieces I noticed that you usually have a cooler tone in the background is there is a specific reason for that?

Renee: I usually gravitate towards them more, I pick wide range of vibrant colors along with the cooler tones for my pieces. The work includes the experimentation of mixed media with acrylic and oil paint in abstract form and realism in the portraits.

Desta: What made you want to show the animal/human connection in your pieces?

Renee: I really enjoy painting and drawing people and have most recently added animals to the compositions. My work is an expression of this connection motivated by my personal interaction and experience. I grew up around animals and always had pets. Animals or pets bring significant health benefits to one. The inspiration for these paintings also comes from the current times we are living in, the here and now with the pandemic, being isolated, and being at home. Our pets are devoted companions that give us joy, laughter, unconditional love, and calmness. I have a little dog, that is important to me. There may be happy moments or sad moments where giving them a hug and playing or walking with them brings a smile or laugher.

I am researching more about how animals are significant in improving the physical and mental health. Some of the benefits are mood boosts, lowers stress, relieves anxiety and depression and also improves heart health. Watching your animal can make you smile by the funny or silly things they do. The moments where the cat plays and the moments your dog does a spin for a treat. To me its therapeutic and brings laughter and calm to one especially in times of uncertainty. 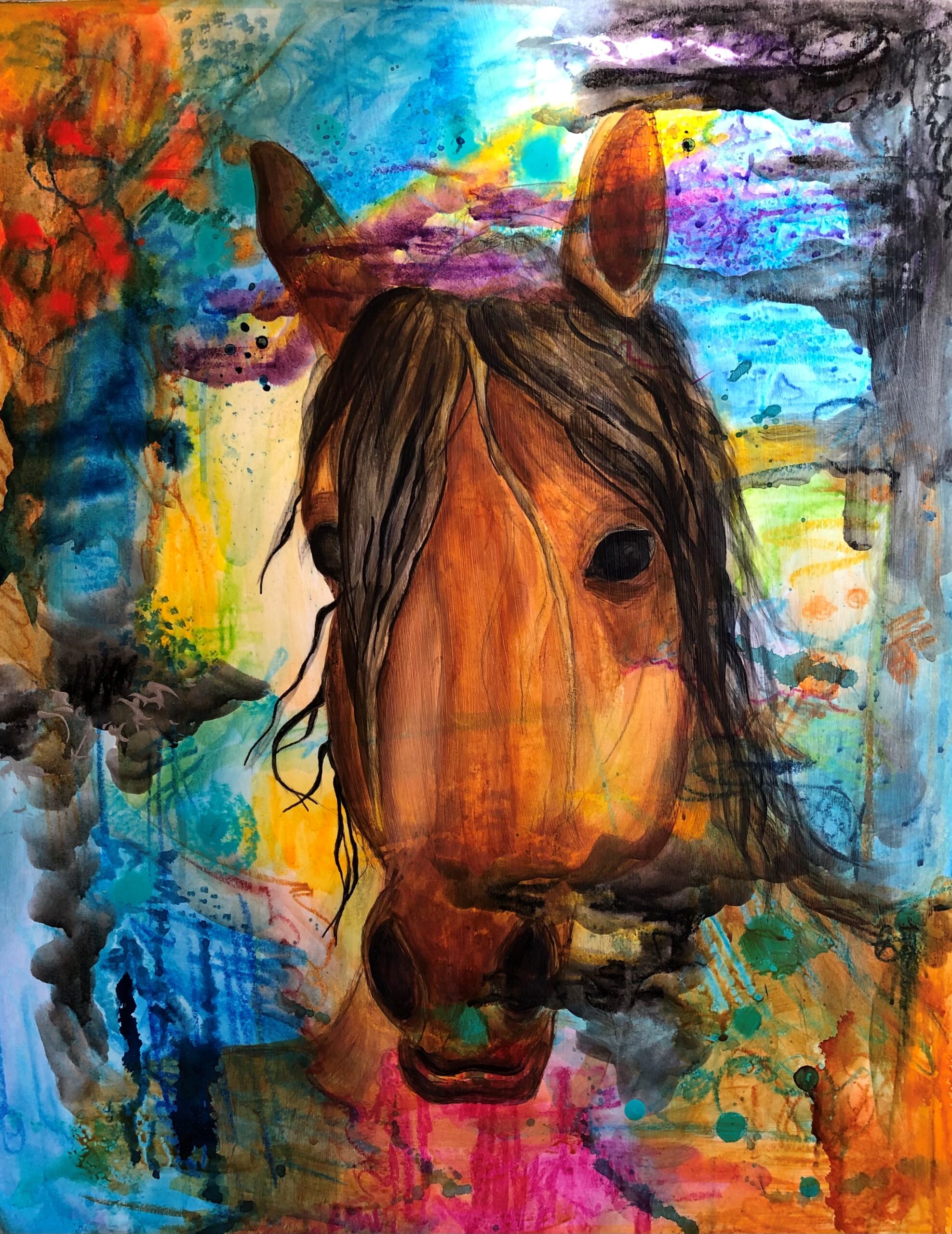 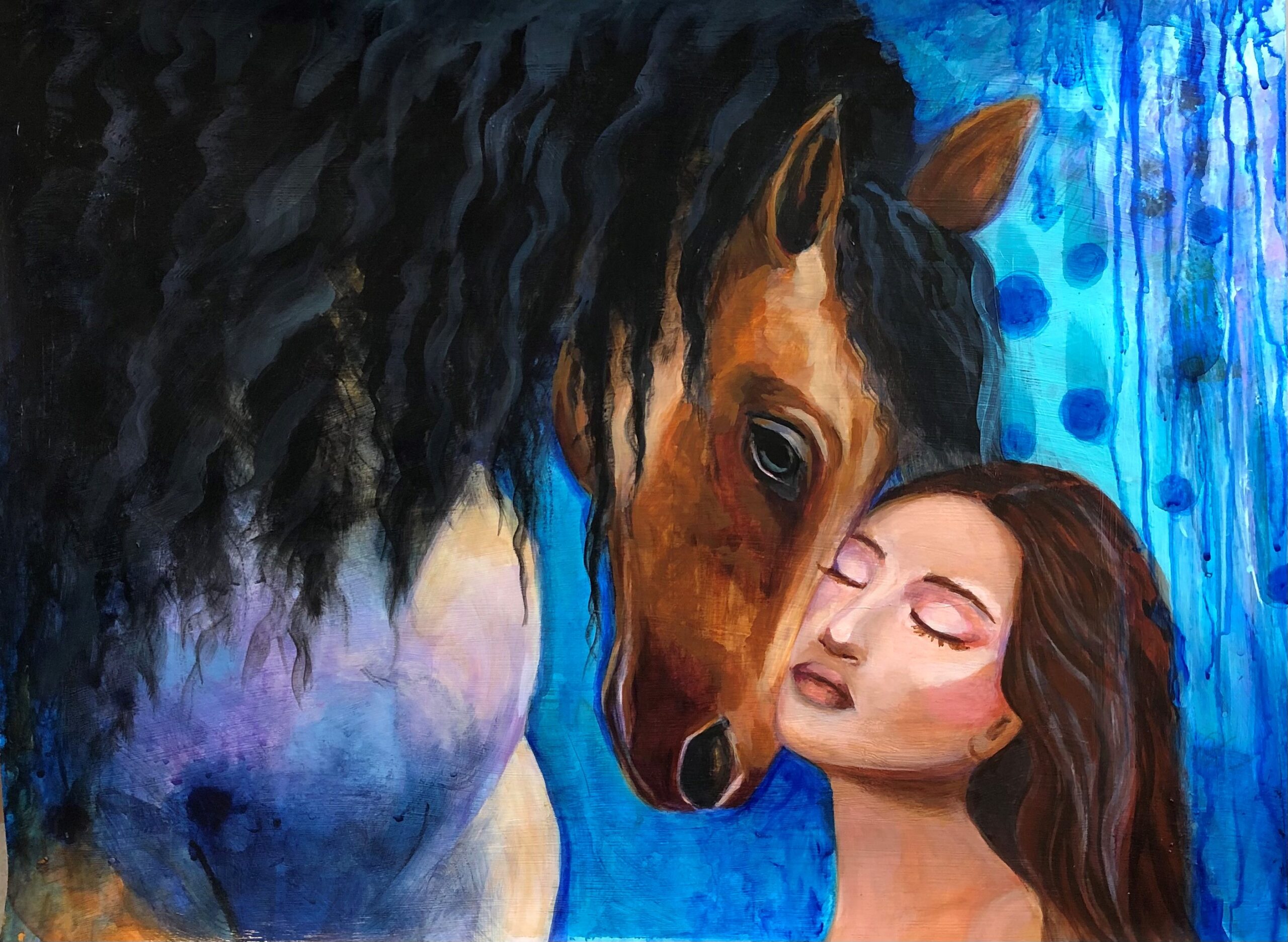 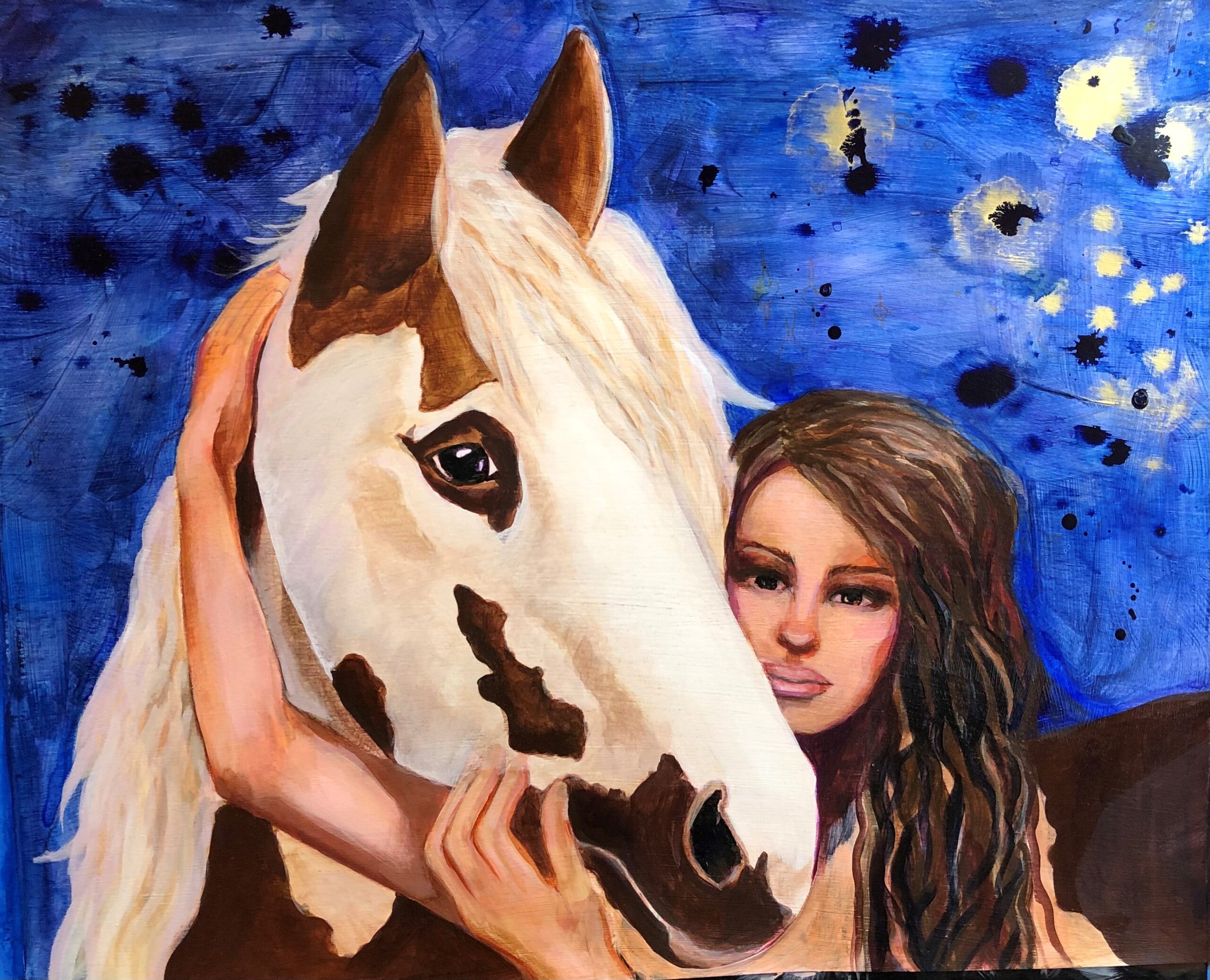 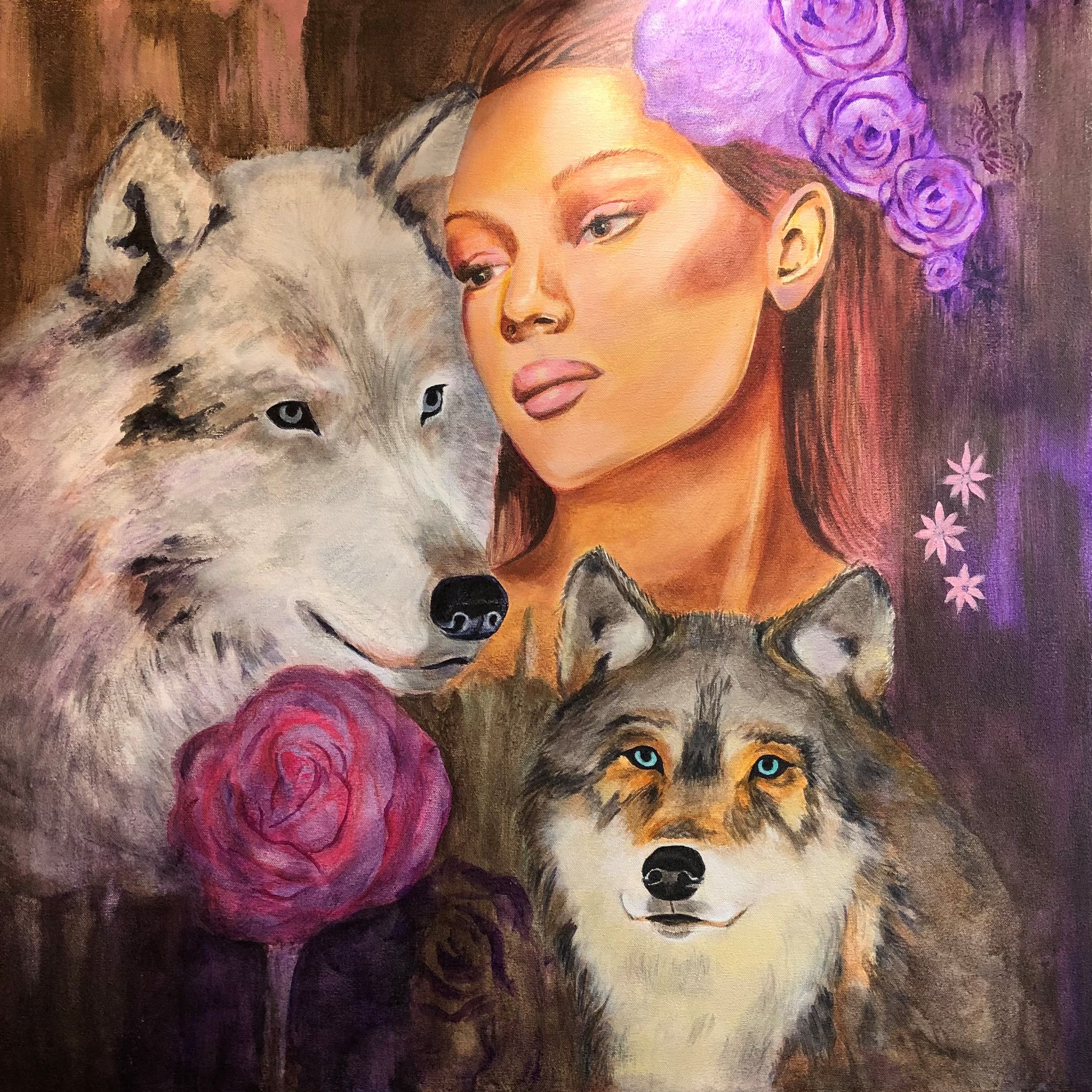 Desta: You said that you want to bring awareness of the health and their therapeutic aspects of animals. Is there a specific reason or something from your past that inspired that?

Renee: Yes, I’ve been around animals a lot most of my life. For me, they bring enjoyment to just being around, they make me feel happy.

Renee: Aren’t they something else!

Desta: They can do the simplest things and you can watch them for hours!

Renee: They always seem to make me laugh.

Desta: And they can just bring a smile to your face!

Renee: They really do. That’s mainly what inspired me to paint animals with people. It’s to bring awareness of those stories and connections we have with them. It’s the experience of it. 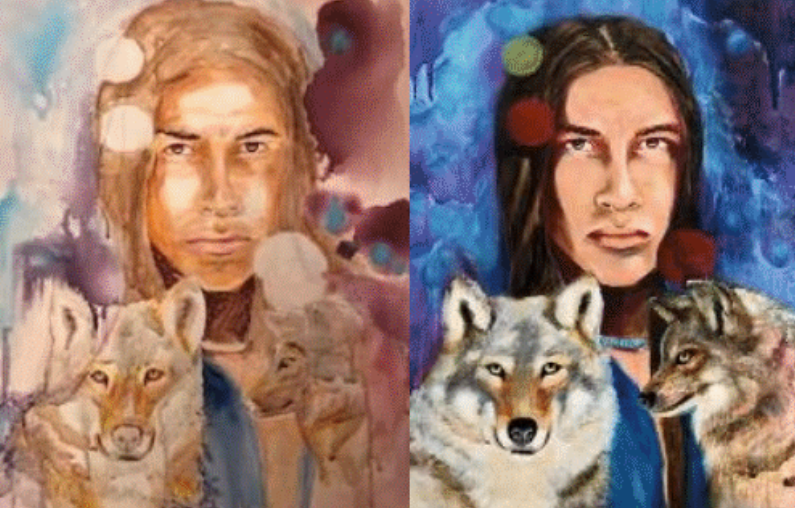 Renee: What made you choose your current writing pieces?

Desta: These were mainly projects from class, later semester work, because that’s when teachers push you to talk about the stuff that pushes boundaries because that brings so much more into your writing and so much more emotion to the audience.

Renee: Yes, Yes, I think it did. Are any of your current writing from your personal experiences?

Desta: Yes, there are two Creative Nonfiction pieces. They were really, really hard to write and I was hesitant to use them. And it was a lot going through those emotions, writing about them because you have to really focus on what you felt in that moment and bringing up as many details as you can remember. And with those pieces, it was it was really difficult, but they were the most honest as I could be.

Renee: When did you realize you wanted to be a writer?

Desta: When I was in the sixth grade. I read at a second-grade level; I was failing everything. I hated school with every fiber of my being and didn’t care. My English teacher at the time pulled me out of class and basically said you are better than this and you don’t  have to go where you are going. Then he asked if I wanted help. I did. He helped me before class, at lunch, and after school. I fell in love with reading and writing because of him. When I got to a point where I was actually ahead of my classmates, he did a two-page story writing assignment. It was really out of the blue. We weren’t doing anything like that before. I wrote this short story and I was really passionate about it, and of course, wrote so much more than what he asked. I turned it in and the next day he asked to see me after class. I thought, “Oh it sucked. I did the worst story ever. It probably made no sense.” After class he said “I want to keep this, your first piece of work, so when you’re a famous published author. I can say I own her very first story.” That meant the world to me. That’s when I knew I wanted to be a writer. So when I did publish a book I could go up to him and give him the first copy.

Desta: Unfortunately that wont get to happen because he did pass away unexpectedly that summer. But because of him I really changed.

Renee: I’m sorry to hear he has passed. I commend you on these pieces and bringing forth emotion. What do you typically like to write about?

Desta: Thank you too. I hope you have a wonderful day!

Renee: You as well. 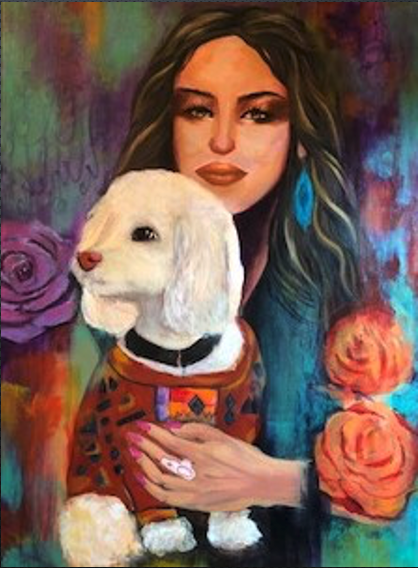 Renee Chavez is a Painter and Jeweler based in New Mexico. She is tribal member of Isleta Pueblo, New Mexico. She is currently working towards a Bachelor degree in Fine Arts, majoring in Studio Arts with emphasis on Painting and Jewelry at the Institute of American Indian Arts in Santa Fe, New Mexico. Renee Chavez is a studio artist. She creates a variety of work that include paintings, drawings, and jewelry. She works in portraiture using a wide range of medium such as ink, acrylic and oil paint. Her artwork is layered in symbolic imagery that include men, women and animals. She also works with small metals and fabricates in silver jewelry, bronze and copper. Her latest creations are wax cast rings and oil paintings of man and animals.