Summary of Conversation with Kelly Dale

In this art in conversation with Kelly Dale, we explored her motives for her pieces, close relationships that influenced her work, and finally Mother Nature. Kelly’s relationship with fire can be derived from her personal relationship with a firefighter who is depicted in the Acrylic piece titled “Firefighter Memorial”. Not only are there moving symbolism and feelings in her work, such as rebirth and determination, but also confidence in her work. Kelly’s work titled “Fire Map” made with acrylic and gesso was derived from a satellite view! After which Kelly changed the concept of light to replicate a real fire map! If you were to look hard enough, you’d find minuscule white and red trails of thread like lines in her fire map, later to find that these are accurate representations of firelines, which I found to be very cool. We chatted about this for some time. Assumptions tend to be wrong sometimes- and when I assumed that Kelly may have been residing somewhere where forest fires were the norm such as California where bushfires make a regular appearance, I was wrong. Though she lives in New Mexico it was interesting to find out that the firefighter in her life is the one who travels all over, much like a Hot Shot Crew. Kelly’s creative process was our last topic of discussion. In her piece “Fire Print” Kelly has this to say “It’s like a little bit different than using like regular acrylics so the process I wanted was, I wanted to still be on fire but then I wanted the colors blended in. So that’s why there’s like a blend for the background. Remember, making trees like differently and printmaking is like a lot different than making it in regular acrylic paint. So, the process is different because you have less ink and then you have a brighter thing that you use like to like smear the ink on a plate.”

Ekphrastic Poetry in Response to Artwork

Headstrong in its appearance, balance finds room for entry

Tall in its gaze and red rust in its flame

Fire reaching up tall for substance

Though no recourse is applied

Sharp curves of pointed metal loop in grace like those

bright leaves of a

A conversation about art with Kelly Dale

Calista-
How are you. Good, good. I’m going to pull up your piece, if that’s okay.

C-
so, one of the questions was  What’s the significance behind fire, if there is any? Is it like a mother nature thing?

K- the significance behind fire is. I have a person that is close to me who does late firefighter
and the idea of me doing this was, was when I first did like a fire painting on a small team. And I wanted to see how, everything would look onto a bigger canvas.

C-
Cool. Yeah, they’re really beautiful. I’m really liking this one and is there any symbolism in them. Because I was looking at this. Okay so this one had the lightning strike. And the mountains on fire and I know you said it was somebody you knew, or you know, that was a firefighter.

K- I guess in general we couldn’t be responsible because as the lightning will probably be the one to like to start the fire like in that painting, they’re the one with the lightning, and they could easily on lightning would probably be like a wakeup call. Take care of earth.

K-
There’s a lot of little things for me, for inspiration for the Fire Map will probably be like. Like usually like when you get on a fire you. They give you like a map, and then it tells you like how, how far the fire has it reached, and how, or how much they want to like to be put out, you know. And then usually we would see that like around the camp area, and then this inspiration came from like Google Images like where you see like the satellite view instead of like a regular like Fire Map. I use texture on a flat canvas too late to make it look like it was from a satellite view. So, um, I kind of changed the concept of light use using like a real fire map, and then easily in Jesu, and then the symbols that are in there. They’re based off of the real Fire Map.

C-
Yeah, I couldn’t see what they were, I thought they were cool. Yeah, just super realistic. It does look exactly like a satellite. Now that you think about it. Yeah, these little cracks and that’s cool I didn’t even know that was a thing, and these little white and red things do you know what these are. You said this is where the Fireline is or something.

C-
I really liked them. I had a few more questions.

C-
could you relate this stuff to like climate change? Could that be a thing?
K-
I’m actually from New Mexico. And then,
the person that I know that is a firefighter. He’s been like everywhere, like putting out fires, and
I’m
by the candle right there like the candle one, the selfie view one that’s him.
Yeah. Yeah. I still can zoom in. Yeah, that’s cool. But he travels and stuff like those hot sheets. That’s cool. We talked about the feelings symbolism inspiration.

C-
last one about sorry about , maybe your creative process. What’s your process to making these, let’s say this one. What was your process behind it?what did you think about?

K-
the process behind it. Well, I’m in fire print it’s like a little bit different than using like regular acrylics so the process I wanted was, I wanted to still be on fire but then I wanted the colors blended in. So that’s why there’s like a blend for the background. Remember, making trees like differently and printmaking is like a lot different than making it in regular acrylic paint. So, the process is different because you have less ink and then you have a brighter thing that you use like to like smear the ink on a plate. Yeah.

So, out of every image that was shown, which one is using is the strongest?

K- It’s all one big canvas so not sure yet, I guess you could say they’re collages, but they’re like, it’s like a timeline.
yeah. For the second one, that’s just like a, like a series of images, running images. 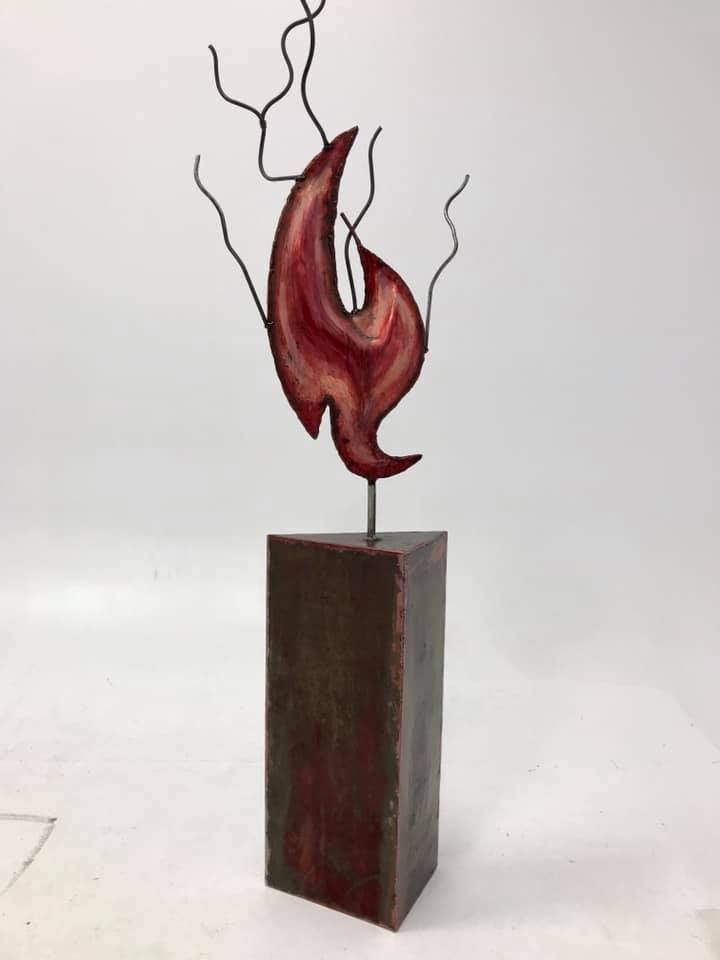 Kelly Dale is from the Navajo tribe and lives in Naschitti, New Mexico. She is the only one in her family attending college to pursue a Bachelor of Fine Arts, focusing in landscape painting. After her schooling, Dale aspires to become an elementary or preschool art teacher. In her near future she would like to attend Academy of Art University in San Francisco to pursue a master's in digital arts. When she is not glued to her easel, she loves to spend time with her nieces and nephew, as well as working as a camp crew member for fire in Owyhee, Nevada.