The bust of Dante Alighieri had sat in my grandfather’s office for as long as I could remember. Perfectly chiseled in the style of the old Italian masters, striking angles that cast shadows in the light, an impossibly perfect ideal of masculine beauty. The bust was cast from bronze and sat upon black marble. This bust would accompany my grandfather as he wrote his books, graded papers, and studied those subjects that mattered to him.

Funny thing about Dante Alighieri, we don’t actually know what he looked like in life outside of scant descriptions of him as a gaunt, stern man who was prone to anxious fits and bouts of anger, an image far removed from the beauty of the bust that demanded attention from whoever walked into my grandfather’s office. Dante wrote Divina Commedia, the Divine Comedy, a long-form poem portraying his journey through the realms of the Catholic afterlife: Inferno, Purgatorio, and Paradiso.

The bust did not originally belong to my grandfather. It belonged to his father, a man who came from nothing and enlisted in the Navy during World War II, graduated from MIT, and eventually retired from the Navy as an Admiral. It is believed that he acquired the bust during his travels, along with a print of the painting Dante and Beatrice by the artist Henry Holiday. My great grandfather believed that he was Dante and that his wife, my great grandmother, was Beatrice, the personification of beatific virtue portrayed in Divina Commedia. When my great grandfather passed, long before I was born, my grandfather wanted only one thing from his estate: the bust of Dante and the painting that accompanied it.

My grandfather was no less impressive than his own father, acquiring multiple terminal degrees and lecturing at various universities. He believed that every person was born for a purpose, and that one had only to find that purpose and pursue it to live a good life. For my grandfather, it was the pursuit of knowledge, and finding god. I would sit with him in his office for hours and talk about these subjects. Though we never discussed it, he knew I was no longer a believer in the Catholic faith, if a child could ever be considered to be a believer in something they can’t truly understand. To him, this was a natural progression, and after a brief period away from the faith, one would return to the fold later in life.

He was diagnosed with cancer shortly after announcing his retirement from academia. It was discovered far too late for any meaningful treatment to be pursued. He did what his nature required of him and set to work studying, trying to find a way out, or perhaps to find god. He collected a veritable library of texts on cancer. He would transition between periods of actively researching ways to mitigate the spread of his cancer to denial. I know that he didn’t want to die, and I know that the bust of Dante accompanied him through it all.

Eventually, my grandfather resigned himself to the fact that while he had escaped death in the protective womb of his mother at Pearl Harbor and had survived a war of his own, it was a simple mutation of cells that was destined to remove him from our mortal coil. He transitioned from reading books on cancer to continued study of theology. I visited him often during this time, as I was studying philosophy at the local college and it gifted me with the knowledge and vocabulary to have a meaningful discussion about the things that mattered to him. We would discuss theology, philosophy, literature, life, love, and everything in between, but we would not discuss the cancer. Dante would watch over us from the corner of the room.

My grandfather was placed on hospice in November of 2018. His doctors allowed him to eat whatever he wanted for the first time in years, and he was placed on powerful drugs to ease the pain of the cancer in his body as it corroded his bones and flooded his lungs. I know that he felt none of it. The last time I saw him, Dante had been moved to his room. The cancer lasted a period of four years, he was on hospice for two months, and he passed on in the winter of 2019. Inferno. Purgatorio. Paradiso. 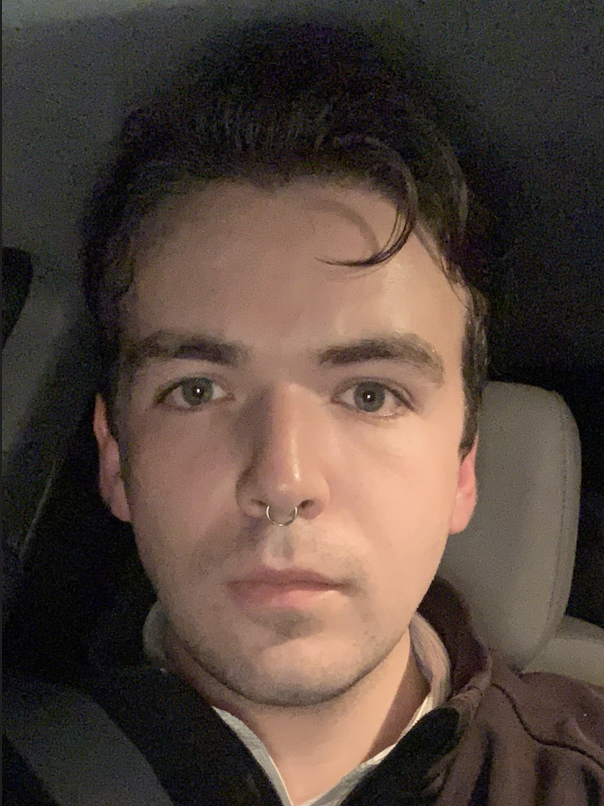 Gabriel Schneider is a freshman at IAIA pursuing a dual major in Creative Writing and Indigenous Liberal Studies. A citizen of the Cherokee Nation, Gabriel is a passionate proponent of language revitalization efforts among the United Keetoowah Band, the Cherokee Nation, and the Eastern Band of Cherokee Indians, hosting biweekly language lessons with fluent first language speakers for any tribal members who wish to learn their language. Gabriel hopes to incorporate his Cherokee language into his works as he progresses in the Creative Writing program, and hopes to meet and exchange ideas with other classmates and faculty who are similarly invested in language revitalization efforts in their own communities.